Al Shaheer Corporation recently announced its IPO and will be offering its shares to the public very soon. I have gone through the company's prospectus and feel it could be a very good investment. I must make it clear from the outset that I have no position in the stock and am in no position in any way to benefit from this recommendation. I just think MeatOne is a good brand, has good market value/reputation, good management, good financials and operates in a good industry, and these among a few other things make it a good investment. Furthermore, I also think that the IPO price of Rs. 43 per share is pretty low and gives chances of good return.

The company is growing rapidly. Formed in 2010, it clocked in at almost Rs. 4.4 billion in FY14 revenues and is on track for significantly more in FY15 since the first half of FY15 was an off season. The post-rights EPS comes out 1.25 for first half of FY15, implying a forward PE of 17, which could be high, but adding consumer as well as growth flavor to it makes it cheap. The impressive revenue growth profile can be witnessed below. 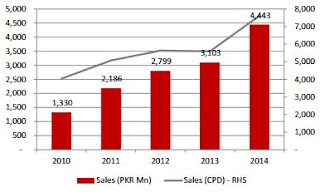 The company derives only 25% of its revenue from the Meatone brand, the rest coming from Halal meat exports to GCC countries. Having export clients such as Lulu and Carrefour in the UAE certainly means something. Finally, Meat exports is a growing market, so is processed, or packaged fresh meat in Pakistan. So all of these are good growth angles.

One source of risk however remains that the company will be using IPO proceeds largely for entering a new industry, that is, processed chicken, going head to head with K&N's and other brands. Competition might be intense, however given a growing industry, this should not be much of a problem.

The board of directors of the company is impressive with experience from Citibank, Unilever, E&Y, Meezan Bank, etc being counted. I think it is a pretty impressive profile. No wonder the forward PE is so high. The company also counts as 'Saeed Anwar' and 'Muhammad Yousuf' as significant shareholders. Wondering if they could be the cricketers:

Having strong management, growth profile, growing industry etc makes this a good investment. A multiple return on investment cannot be ruled out in a relatively short period of time.