If you'd listended to me, You'd be a millionaire by Now!

The story of Descon Oxychem (DOL), SPL's spiritual sister (spiritual since it has the same driving factors as SPL) is no different as it has yielded a similar return of 17.3% during the period.

The basis for the recommendation was simple. Increased peroxide prices would (the companies' product) result in increased gross margins. A constant cost base was also highlighted, as government changes gas prices only on a six monthly basis and the last change would not take place untill for the Septmebr quarter.

Moreover, as borrowed from a daily of SC securities, and credit duly given, decreasing finance costs in view of improved cash flows would further boost earnings.

Both the recommendations were correct and as it turned out, gross margin did increase for both the stocks and the finance costs decreased as well. Moreover, the EPS of especially DOL incerased significantly and the company recorded its highest EPS in 6 quarters.

The EPS chart along with the updated gross margin chart, which is the cornerstone of this analysis is presented below for illustration: 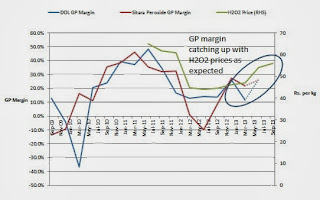 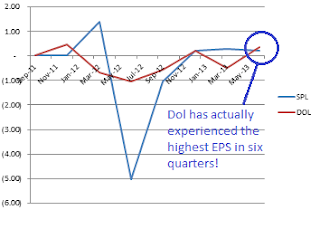 So whats next? My initial thesis was better still results for the September quarter due to even higher peroxide prices. The low finance costs theme should follow through as well driven by further improvement in cash flows. Gas price increase should have posed a risk for the stock since its the major raw material, but that risk has been nullified given the government's decision to deferr the same till November.

Any production and sales hiccups could however disrupt revenues and earnings potential, however if this serves as any consolation, sales and revenues have been relatively stable for the two companies given the historical trend.

Hence in view of further rise in peroxide prices, together with a calculated assumption of constant production and sales, I would still stick to my assertion of further improvement in financial performance for both the stocks for the quarter ended September 30th, 2013.
Posted by Unknown at 12:44 No comments:

BUY DOL WHILE IT LASTS!

Buy Descon Oxychem (DOL) while it lasts! Its spiritual sister company, Sitara Peroxide had a good financial performance by predicted by me and has been on upper locks since last 2 days! However movement in DOL, while positive, has been minimal. I would suggest taking a position before the company announced the result soon!

Given the stock level is currently PKR 5.26, it represents a return of 30-50% even if just two upper locks occur! I would recommend to buy it for 6 month investment horizon.
Posted by Unknown at 22:05 No comments:

Ok Sitara Peroxide announced its result today. The company posted an EPS of Rs. 0.19 for the quarter. However, the EPS is not important as it was not part of the forecast. In my last post I had predicted an increase in gross margin based on increasing peroxide prices. The gross margin in fact did increase, up 4 percentage points month on month, to 26%. So this lends credence to the price-gross margin thesis and the same story should continue with increased effect for the September quarter . I guess Ill update the gross-margin, H2O2 Price graph for corroboration: 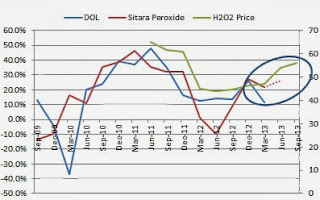 Not only does does this reinforce the idea of improved financial performance for next quarter, it also bodes well for Descon whose result will be announced on the 30th. It may be noted that SPL was on upper lock today and with Descon booking sizeable gains as well. 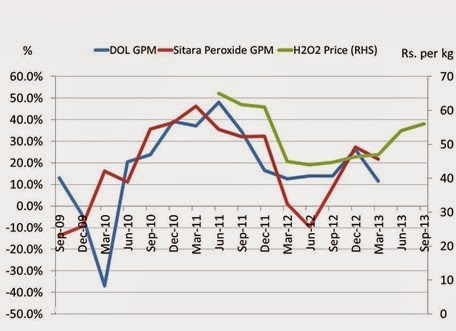 Notice the absence of gross margins from the last two quarters. This is because the results pertaining to these have not been announced as of yet. Hydrogen Peroxide prices have however increased substantially during the period. Standing at Rs. 56 per kg today as opposed to Rs.44 in March-13, showing an increase of 16%.

An improvement in gross profit margins appears to be in order for the two quarters, that is, June 13 and September 13. The same analysis could be extended to operating margin due to comparatively lower administration and selling costs.

The final idea lends credit to SC Securities which says that the companies will experience declining finance costs too due to improved cash flows and lower working capital finance requirements.

I would say that a decline of 50 bps points in interest rates during the period should also help in decreasing finance costs.

Owing to improved gross margins and lower finance costs, improvement in financial performance of the two companies, DOL and SPL appears to be in order for the quarters ending June-13 and Sep-13 .