What is driving ECOPACK?

What is driving ECOPACK?

Disclaimer: I have a position in this stock

Double digit CSD (Cold and Soft Drink) Growth, under-capacity of PET Bottle Industry and a shift in consumption patterns towards PET bottles, are few of of the factors fueling the changing economics of Ecopack. After 4 years of consecutive losses, the company appears to be finally gaining traction and reporting better numbers. The biggest plus point up till now has been the more than Rs. 2 EPS of the company that was reported for September 30th, 2013, which was up almost 100% when compared to the same period last year. More noteworthy still, is the more that 4 Rs. EPS the company reported for the June quarter Fuelled by seasonally high demand in the summer season apart from the Ramzan which is typically associated with high consumption.

Growing Beverage Industry
According to Coca Cola Icecek, which is the holding company of Coca Cola Pakistan, volumetric sales in first nine months of 2013 were 22% higher year on year. This comes on the back of 23% year on year increase in sales the same period last year resulting in over 50% volumetric growth in two years.
Pepsi reports similar sales growth with growth being in ‘double digits’. All in all this points towards a growing industry. The trend does not appear to be understandable given the lacklustre performance of the economy as a whole but be the same has some parallels to the consumer industry where the success of Unilever and nestle in the past few years can be highlighted. Whether the trends is here to stay for the next few years has yet to be investigated.

Shift towards PET bottles
The shift towards PET bottles, as reported by the company appears to make sense. According to of the company, it is selling more bottles as compared to pre-forms, the latter being a low margin product. This according to the company (as reported in its annual report) is because of the growing demand of PET bottles and low capacity. Now why was the company making losses in the past 4 years was, again as reported by it, was over capacity. However now that the industry does appear to be growing (as reported by the Coca Cola and PepsiCo figures) increased capacity utilization of the PET bottle industry appears to make sense and there is at least some credence to the story.

A Note on Costs
PTA is the ultimate raw material of the company. It appears they are on low levels, largely caused by supply glut in view of new capacities and not enough demand. For instance, in late November, Asian PTA prices hit 16 month low. Low PTA prices obviously auger well for the company in terms of improved margins. However, they are not that good for Lotte PTA.


Ecopack has a highly seasonal business. Sales tend to peak in summer months, associated with high beverage consumption and then decline in the winters months. The same effectively translates into the EPS of the company with the company reporting profits in the June and September quarter, and losses in the December and March ones, as given from the below graphs: 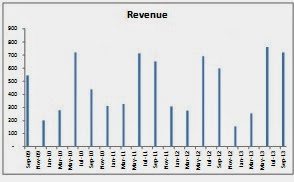 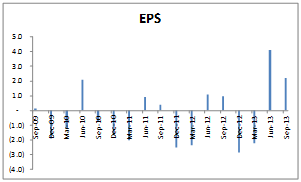 So while the last two quarters result has been humongous, (cumulative Rs. 6 for the summer season), we might as usual see some losses in the December quarter.

Conclusion
It appears the stock has risen up 50% in the last few days alone. Whether it goes up any further is yet to be seen.
Posted by Unknown at 18:31