At the risk of sounding rude, markets are naive. It is true they value companies at PEs. If a market has a PE of 8 and a stock has a PE of say 4, the stock would be a buy. They know they have a PE in mind, all they are waiting for is the earning. So they wait for the year to end, accounts to finalize and the result to come out. and whatever the earning comes out, the price suddenly rises until it is some multiple of that earning (in this case assumed as being 8). So anyone, who can get to know that earning in advance can make money by buying the stock when the earnings do not come out (or leak out) yet. And that is where the naivete of the market lies. The naivete of the market lies in it not knowing that many a time, the annual earnings can be found by multiplying they nine month earnings by 1.33333 (ok forgive the extra 3s). This is mostly true for under-covered stocks and will be my thesis for the forthcoming analysis and a concurrent BUY rating for ORIX Leasing.

In my last blog post some time back, I explained how good Orix leasing was good and all. That analysis was based on 3 month accounts. I went into hybernation mode for a while and when I woke up, and decided to reopen my blog, I discovered that 9 months results had come out. The stock had also moved somewhat, going up around 20% during the period. But the thing worth noticing most was that the stock had not moved as much as dictated by financial performance. The company has not only improved financially, but in fact seems to be on the  growth trajectory. The multiple for FY13E is significantly low, standing barely at 5. The dividend is expected at at least 2, resulting in a dividend yield of 11%. Moreover, given the annual result is announced and comes out expected, the buying frenzy (forgive the hyper-lative) will push the stock to around a multiple to at least 6? if not 7 or 8?, resulting in the stock going up to 24 to say the least. Hence there is a 40% upside on the stock as the annual result gets announced. Moreover, who knows where it could end up next (remember its a growing stock).

My last analysis was based on preliminary numbers (1Q accounts) and was pretty simplistic. I presented some numbers from the last 6 years and highlighted the improving trend. Then I extrapolated annual earnings from a single quarter, by multiplying it by 4 (yes it was pretty simmplistic) and arrived at the figure of 3.2 and said that it could go higher. The stock was at 15 at the time so I said well its good buy bla bla. But there was at least some substance to my argument. While annualized earning was coming around 3.2, the earning now appears to be 3.9, based on 9Q numbers, and it might as well be 4!

So the stock is a good buy in the short term with sizeable dividend yield and capital gains potential. So whats in it for the long term? Or in other words, what happens when the stock achieves a level of Rs. 24 (If it does, hopefully). Well there are a number of things that make it a buy in the long term (yes guys it is a gold mine. Buy it while you can! - ok not).

Well, the first and foremost reason has already been highlighted. The business is on the upswing generally and I have already emphasized this point in my last post. Its a highly systematic stock. It fundamentals move greatly with the shape of the economy. Economy goes down, NPLs rise, disbursements slow, revenue decreases, and finally, the EPS gets affected. Here, I'll post the 6 year financials again for review: 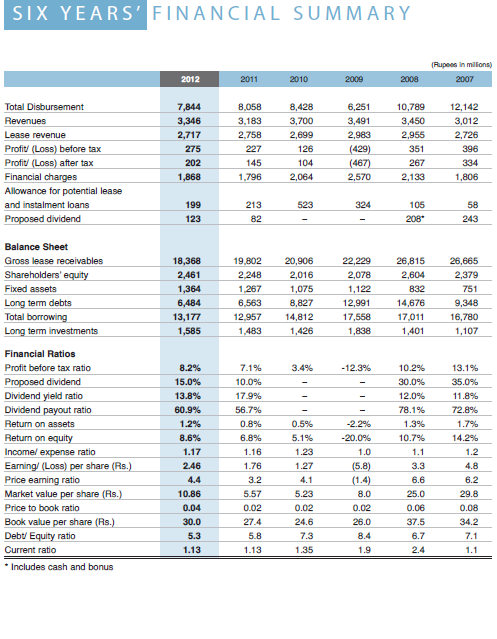 As you can see from the above, disbursements, earnings, lease losses, dividends were all pretty badly effected by the local financial crisis of 2008. However, a review of latter numbers reveals that they have been gradually improving since then.

Improvement in almost every quarter.

Asset Liability Risk:
Asset liability risk is probably one of the greatest risks a financial institution faces. Rising deposit costs coupled with falling revenues can prove disastrous. This holds true for the leasing industry as well and was a case in point during the FY08 financial crisis. The increased interest rates due to high inflation coupled with IMF demands put the entire industry in jeopardy. investments banks, leasers, all faced the music. So what does Orix have that can safeguard it from the future. Analysis of liabilities reveals the company has significantly high dollar borrowing with extremely low cost at L+1 etc. That is almost free! So earnings 12% and expensing 2% is like a walk in the park.

Finally, I would copy one statement here from the FS that I always pay attention to. and there is a reason for it. It is because I believe the directors report to be quite honest. Moreover, when the statement is written, 1-1.5 months have already lapsed into the quarter. The the statement is not entirely forward looking and is based on some empiricism. So here is the statement:

So FY13 is going to be a good year for ORIX LEASING.